J.P. Morgan recently released the Nothing But Net Internet Investment Guide for 2009. The purpose of the guide is to provide Internet industry investment advice for clients for the coming year. The information and advice inside, a mix of statistics and trend outlooks, is also valuable for those investing in social media.

The guide is broken down into several sections, including outlooks by geographic region and industry, and comes in at a whopping 340 pages. In this post, I’ve extracted important quotes, data, and trend predictions related to social media marketing.

First, we believe consumer news consumption behavior is changing. Magazines and newspapers usually have a significant lag time between the news occurrence and its publication, as the process of writing, printing, and distribution is complex. Therefore, instead of reading newspapers, consumers are becoming more dependent on the Internet for breaking news.

Between real-time update services like Twitter and information syndication by RSS, consumption patterns are definitely changing. Marketing dollars are following the eyeballs, but are not all going straight to display advertising. Users of social media services want to be engaged, and as these services continue to grow, spending on social media marketing should also grow.

Secondly, we think newspapers have failed to manage their cost structure. In our view, they try to be the source for all news, and we think this model is unsustainable.

Newspapers can’t compete with the long-tail of information from niche blogs and websites available on the Internet. The ease of information distribution facilitated by the Internet enables bloggers to focus on niche topics. A business model that provides an umbrella for many niche sites to operate under, used by blog networks such as Federated Media and Gawker, works with the long-tail instead of against it.

Finally, blogs have existed long enough that they are becoming mainstream, with some bloggers making their living off the blogs. As a result, we think some bloggers and publications have become as trusted a news source and opinion provider as traditional media.

Blogs such as Huffington Post for political news or Techcrunch for technology and start-up news are key examples of trusted blogs. Techcrunch now has over 1 million readers, measured by RSS subscriptions alone, and has spun out other related blogs, services and products such as a gadget blog, a database of technology companies, and an annual conference.

Social networking sites, as a group, have not been able to command very high
advertising rates for their page view inventory; the supply of “bulk” page-view
inventory from social networks was a contributing factor to the stagnating CPMs for
graphical ads over the last two years, and we do not believe demand has yet caught
up with this supply.

The report identifies a variety of monetization approaches for social networks, including performance-based advertising, virtual goods, linking to classifieds or eCommerce markets, and paid premium memberships or a la carte features.

Facebook recently unveiled several new products under the umbrella term “social ads.” The ads take a basic image/text combination, video, or virtual gift and add a comment box below. When a user sees one of the ads, that user also sees all of their friends’ comments on the ad.

Older Users Still on the Sidelines

Older users remain largely on sidelines. Our proprietary survey indicates
75% of users aged 18-41 used social network sites, and only 35% among
those aged 42 or older. Further, whereas 40% of social network users 18-41
reported visiting the sites at least 20 times a month, older users tend to be
occasional users: in the 42+ group, 63% visited the sites 1-4 times a month.

Social media marketers should understand the exact audience that their campaign targets because that understanding will dictate which of the thousands of channels available online, and hundreds of different techniques, the marketer focuses their time and money on. Although the major social networks are still growing rapidly ( Facebook hit 200 million unique visitors in November 2008 ), the data above shows that social networks should not be the sole focus of a campaign targeted at older market segments. Instead, the campaign could focus partly on large and niche social networks, partly on blogs, and largely on email marketing (a recent Pew Internet study places email usage of online adults at 91%, with a drop in usage for younger groups ).

Users Spending a Smaller Share of Time on Email Sites 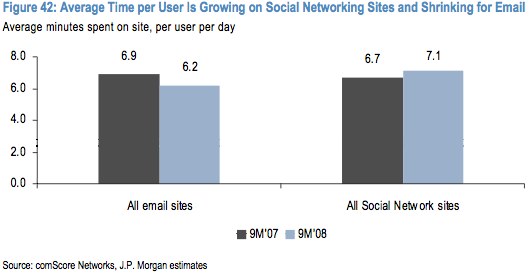 Social network sites excel in their ability to keep users on the site: comScore data
indicates that, across the universe of social networking sites, users spend an average
of 7 minutes per day, a number that has grown Y/Y; the trend is headed in the other
direction with email sites, which are drawing less user time.The effect on email may be partly due to a loss of usage share to social networking sites. Additionally, part of the impact could be related to the sites’ greater efficiency, driven by newer, Ajax-based email platforms.

One key to the success of social networks is the high potential for engagement. Email allows for two way communication, but social networks allow, in addition to two way messaging, easy sharing of photos, links, videos, and more. Users of social networks are engaging and sharing with their friends, so marketers interested in entering the mix must approach users with a focus on conversation.

As time spent on the top 3 websites decreases, widgets have more opportunity to engage users on sites deep within the long tail. Widgets for sharing personal content such as photos and videos are already very popular. Now, many companies are building widgets to allow users to host and share information about their brand, events, products, and services. 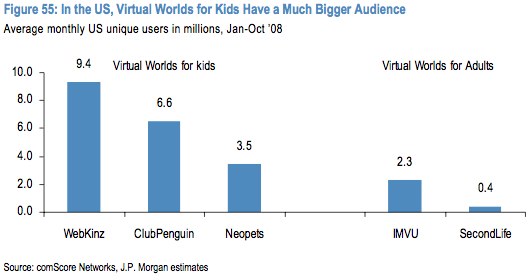 In 2007 and 2008, it seemed that every major company had a presence in SecondLife. Moving in to 2009, its becoming apparent that SecondLife is not what it was hyped up to be. However, virtual worlds targeted at kids â€“ such as WebKinz, ClubPenguin, and Neopets â€“ have exploded with growth. If SecondLife continues to stagnate in 2009, money allocated for marketing within virtual worlds, unless the audience is younger, should shift towards other social media marketing channels.