Aug 31 5 Elements of a Retweet Machine: Case Study of Mashable


“Adam Schoenfeld is the President and co-founder of RowFeeder, data junky, and spreadsheet lover. RowFeeder is the world’s simplest social media monitoring tool, used by businesses of all sizes to collect and analyze social media data from the comfort of an Excel Spreadsheet.”

When Mashable posts, people listen. And not only do they listen, but they echo, in the form of Retweets. We recently experienced the awesome Mashable Retweet machine on an article covering RowFeeder’s new social media monitoring in Excel. The article saw 1,365 Re-Tweets in total. On top of that, we saw a 20% conversation to sign-ups on visits from the article. We were amazed watching the Retweet machine in action and decided to take a look at the data and how we might apply Mashable’s practices to our content and social media efforts.

1. Mashable’s audience is comprised of influencers

Using a sample of 2 weeks, we found that over 25% of tweets of the whopping 173,00 tweets mentioning “Mashable” are from influential Tweeters â€“ aka 1,000+ followers and/or a Klout score of 30 or higher. The average Mashable tweeter has ~1,300 followers. The following chart shows the influencer share of total Mashable tweets over the last 2 weeks. 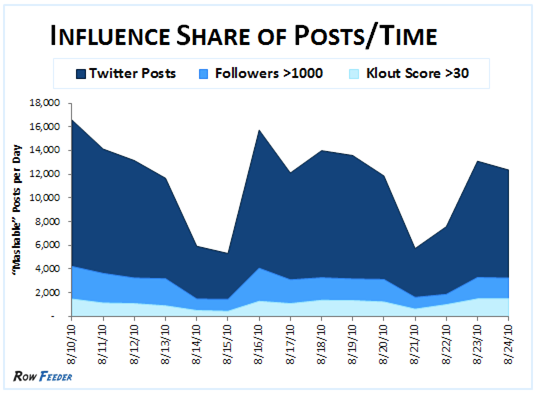 2. The sun never sets on Mashable’s empire â€“ RTs in every time zone

Only 54% of Tweets with “Mashable” come from the United States. That leaves almost half the tweets to be dispersed around the globe.  There’s rarely a time of day when the tweet-o-sphere is quiet for Mashable mentions. 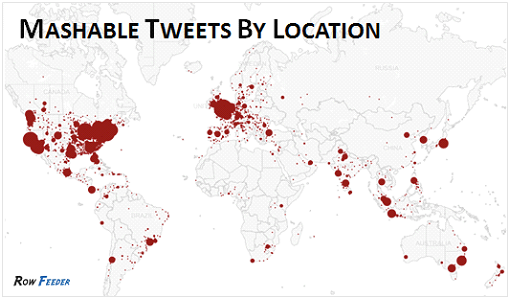 3. Mashable’s audience is not just influential, but also engaged

Almost all of the tweets with “Mashable” in the tweet contain a link. That’s right, 96% have a link. Links bring traffic and increase SEO for the post. We might also assume that users feel more comfortable RT’ing something with a link â€“ something with a cold, hard (ok, soft copy) document to back up the tweet. 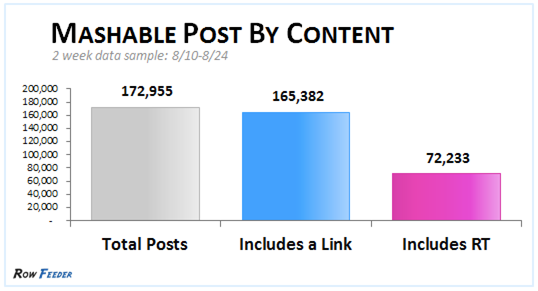 Mashable articles are perfectly designed for Retweets. Alongside all their posts is an easy “Retweet button,” enabling users to easily engage with the story and the brand by simply pushing a button.

In addition, Mashable’s tweets are typically short and sweet, leaving room for user to easily re-post. Looking across all mentions of Mashable in the period analyzed showed the average length of tweets at 101 characters. Often this counts the “RT @Mashable” so the original posts are leaving plenty of room for users to share and comment.