Posted at 17:42h in Social Media Examples by Riverbed Marketing

Today I would like to take some time to continue the 26 Social Media Marketing Examples and examine Taco Bell. As a fellow “offbeat” connoisseur and fellow funny man I can definitely relate to Taco Bell and the approach they have taken over the years. Humor has typically been at the forefront of many of their traditional campaigns.

Without much surprise they have transitioned well into the social sphere, although, could use some fine tuning and focus with their social assets.  Below I will highlight some of their efforts. 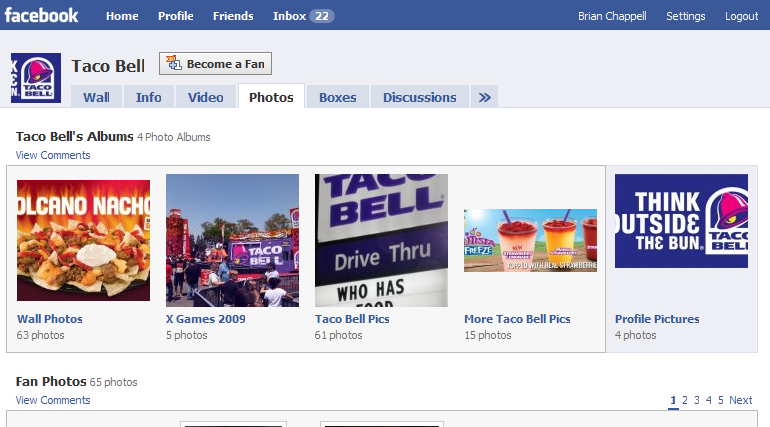 Upon loading Taco Bells Facebook page you come across their Photos tab. I am not exactly sure why they set this as their default page, especially considering they have 550,000+ fans. The social proof exhibited from the Wall page is much greater considering it shows how large the pages user base is. The photos tab on the other hand has only 65 user submitted photos.

Typically seen with many branded Facebook pages, there isn’t much focus and Taco Bell’s Facebook page certainly falls in this category. Outside of the videos, photos, and discussion tabs there isn’t a lot going on.  I would really like to see them explore a little more and try and create targeted campaigns around their large Facebook presence.

On top of the main branded Taco Bell Facebook page they look to be building locally targeted facebook pages. As of right now most of them have very little content and only a handful of followers.

All in all the company seems to be doing a descent job corresponding with the user base within the wall and discussion tabs, using it to assist customers when they address problems. 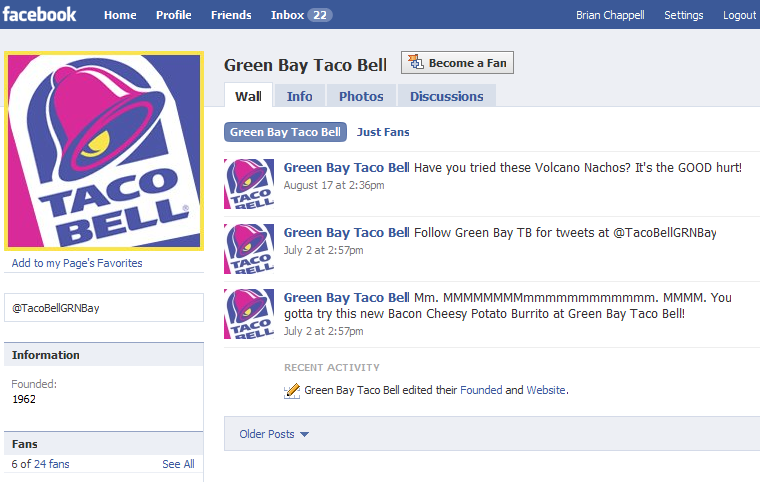 Taco Bell has an interesting approach to Twitter as well. They have the typical corporate account located at Taco_bell.  The Twitter.com/tacobell looks to be suspended which means no one from taco bell has even tried to recover it, because I know for a fact they would hand it over to them if they asked.

What is interesting about Taco Bells Twitter approach is that they are spinning off local Twitter accounts and targeting those specific areas (similar to how they are doing it with Facebook). An example being http://Twitter.com/TacoBellMilwauk which services the Milwaukee area. This seems like a good idea (if they have the resources) but I wonder how much actual content they will be able generate and if they will be able to create any momentum with their accounts. Currently most of the accounts only have around 100 followers which isn’t much. 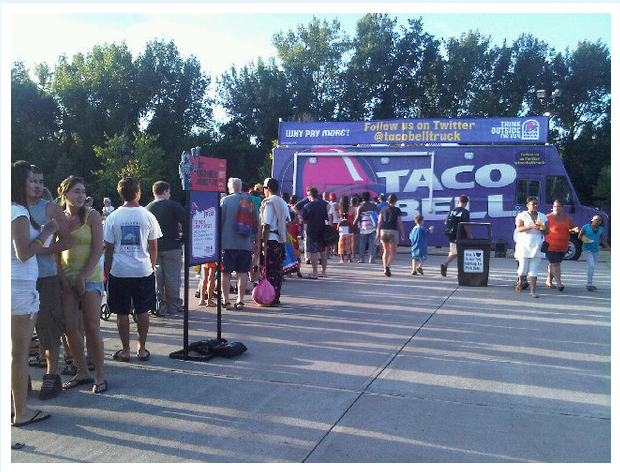 Another approach that I do like is what appears to be a van that is going around the country handing out free tacos. They have integrated clear calls to actions with the Van and encourage folks to follow them on Twitter at  http://Twitter.com/tacobelltruck  This is a great approach that ties the traditional guerilla marketing approach that we are accustomed to seeing from Taco Bell, to the social web via Twitter. Everything about this account is great, from the endless amount of content that is generated and shared via Twitpic to the word of mouth marketing that ensues around free tacos! 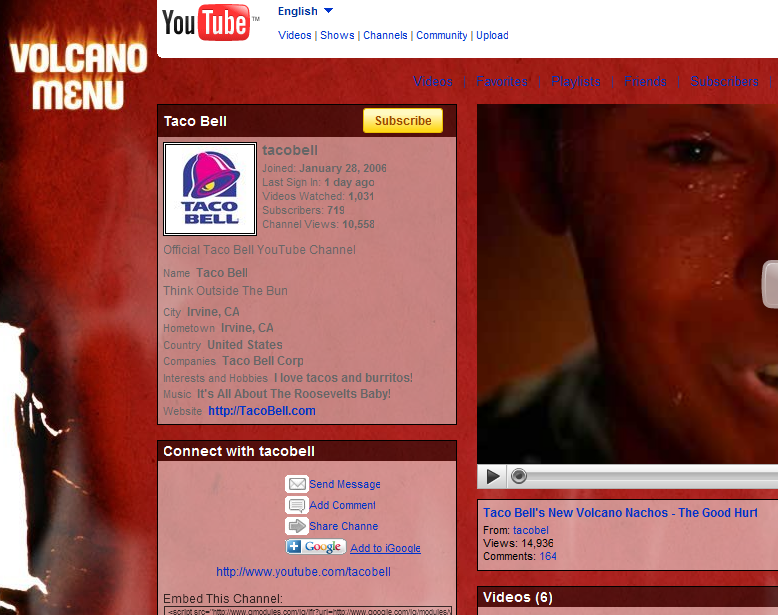 Taco Bells YouTube account is pretty cut and dry and there does not seem to be a lot of activity going on with it. It looks like just in the last 3 months they have started uploading commercials. Pretty basic but honestly, catchy commercials like the ones Taco Bell spins off generally attract a lot of views. I have seen other well known commercial accounts on YouTube doing the same thing, and at the very least uploading commercials like this can be a very easy way to get a lot of branded impressions. YouTube is a very cost effective way of getting branded impressions from our experience.

With that said I would like to see more campaign level strategy going on with this account. I get the feeling they have just thrown stuff up without much forethought. 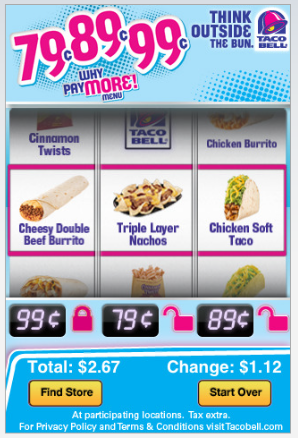 In May of 2009 Taco Bell launched their first crack at an Iphone app. So far it seems to have gotten pretty good coverage with over 2000 ratings so far.
In short, the app allows users to find items offered by Taco Bell under a dollar. It also has a store finder to help users find Taco Bell locations on their Iphones. Reviews so far are pretty mixed although I do appreciate the attempt by Taco Bell to enter the app market, which is growing at phenomenal rates.

In large part I get the feeling that Taco Bell’s social media initiatives are spread out and disjointed. There is very little cross promoting going on and there is definite room for tighter integration. However, overall they are doing a pretty good job of experimenting with new ideas, such as the locally targeted twitter accounts and Taco Bell Twitter Truck.